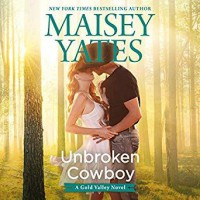 In Gold Valley, Oregon, forbidden love just might be the sweetest....

Dane Parker traded in his trailer-park roots for glory as a bull rider. But when a serious injury sidelines him for months, it's the first time he can't just pull himself up by his bootstraps. The last thing he wants to deal with is sweet family friend Bea treating him like one of her wounded animals - or the unexpected attraction that suddenly flares between them.

Beatrix Leighton has loved Dane for years, while he's always seen her as another sister. When she enlists his help to start her animal sanctuary, she thinks it will give him purpose. Instead, it brings all the desire she feels for him to the boiling point.

Bea's father taught her early on that love means loss. But could her forbidden crush turn into a love that will last a lifetime?

Unbroken Cowboy is book five in the Gold Valley by Maisey Yates and Narrated by Suzanne Elise Freeman.

Bea is sweet, kind hearted, and loves animals and all creatures. She is taking a look at her life and making changes. She’s also had a crush on her sister-in-laws’s brother, Dane for a long time, but she knows that he and everyone sees her as a child. I couldn’t connect to our heroine Bea. Her sweet and innocent thing is well and good, but it got on my nerves and eventually felt to child like. I never felt like she grew up. Never felt like she was taking life by the hands and living it. She stayed safe in her bubble, her little cabin.

Dane is a rodeo bull rider who finds himself injured and his future in question. His injures put him in a dependent position and he hates it. He’s a very grumpy man. As for Bea he’s always seen her as the sweet innocent little sister. The time he spends with her during his recovers has him seeing her in a new light. I liked Dane well enough. Yes, he’s grumpy for a lot of the book, but I get it and understand he’s got to come to terms with his injuries and that the rodeo life is over and thing figure out what to do.

As for Dane and Bea’s relationship it felt more like a high school relationship with all the occurred moments and realizing that the girl is a women etc… *A little rant/side not: The author calls Bea a girl a lot instead of a women. That one word, girl, frustrates me. A grown women, is a women, not a girl. If you understand what I’m trying to say. The girl word only works for kids in my opinion. Now, moving on the relationship was just too teen like. It was slow moving and then at the end it felt rushed and unsatisfying.

I’ve enjoyed the previous four books and I was looking forward to Dane finally seeing Bea as a women, but unfortunately this one was not what I wanted. It just lacked the adult vibe for me.

Narration: Suzanne Elise Freeman continues to narrate for the Golden Valley series and she did a fabulous job again. I really enjoy her narration and voices for the characters.