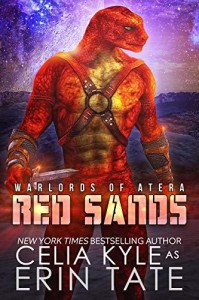 She’s on the run from a violent past. He solves his problems with a sword.

Fleeing a life of abuse, Sheri climbs aboard a mail-order mate spaceship bound for a distant station, but never arrives… Fate intervenes and her trip takes a quick, deadly turn when she crashes on the planet Atera. She’s surrounded by endless sand dunes, dangerous creatures, and alien beings that remind her of Earth lizards. But one particular lizard hardly leaves her thoughts—a sexy, two legged, muscular male bent on protecting and caring for her at all costs.

Drazan is a fierce warrior, the strongest Ateran of the Red Sands, he rules his dunes with an iron fist and sharp sword, and is honor bound to face all challengers to his position. During one of these battles something… strange… happens. Fire rains from the skies and a strange black metal box filled with females crashes to the sands. All thoughts of fighting are lost to the allure of these odd humans—especially one deliciously curvy female who stirs his blood. Now he finds himself with dark yearnings, strong need, and a hardness between his legs that he’s never used before.

With Sheri consuming his thoughts, Drazan may have forgotten about his last challenge but his opponent’s brother hasn’t. Now he’s determined to see Drazan suffer… even if that means killing Sheri.

Red Sands is book one in the Warlords Of Atera series by Celia Kyle as Erin Tate.

Red Sands is currently on Kindle Unlimited and that is how I picked it up. It’s a nice start to the series.

We are introduced to a desert planet with lizard like aliens. There are a few different types of colors for these lizard aliens and each live in different parts of the planet. They all come together during one time of the year to find their mates. During this pilgrimage something falls from the sky. They feel it’s from there goddess.

All the human women where on their way to be brides to aliens when something happens to their ship and now they are stranded on this sand planet. The human women are trying to learn and understand this new world and in doing so some find their soul mates.

Drazen is without doubt a sweetie at heart. I liked him. They aren’t without technology they just don’t bring it on there pilgrimage into the sacred sand lands.

Sheri, I didn’t like her. She struggled with trusting and getting intimate with an alien even thou she signed up to be a bride for another alien race. Contradiction.

The romance is a slow build and slow towards the love scenes. The love scenes where successful, even with the physical differences. I’m not sure if I total believed in the romance by the end; because of how against Sheri was of hooking up with an alien.

I liked the world building. I also enjoyed meeting the different tribes and learning about the lizard culture. I would have liked more information about their wildlife and flora.

We are also treated to a little evil plot in that someone is trying to kill the leader of the Red Lizards.

Red Sands was an ok read.