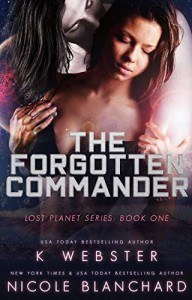 Our planet, Mortuus, is lost and dying.
A desolate place where a few lone survivors dwell.
My men have lost hope. Our future is bleak.
Longevity is a luxury we can’t afford.
The most we can hope for is survival.
We’ve all but given up when an opportunity presents itself.

Five females—a chance at a future.
Procuring these women went against everything I’d been taught, but desperate times call for desperate measures.
They’re ours now.
Asleep and made ready for breeding.
We won’t die out—lost and forgotten.
It’s our destiny to grow and once again inhabit our lonely planet.

I am Breccan Aloisius, the forgotten commander.
My people will have the future they deserve.
I’ll make sure of it.

My mind is made up…until she wakes and nothing goes as planned.

The Forgotten Commander is book one in the Lost Planet series by K. Webster & Nicole Blanchard.

I struggled all the way through this novel. This review maybe hard for others to understand or read. I tried not to disrespect the authors’s work, but I needed to say what this book felt like to me.

I found this book disappointing and all kinds of wrong. It’s an alien breeding romance with very little romance at all. It’s more along the lines of Stockholm Syndrome.

First off Aria is violated while in cryogenic sleep with the aliens implanting their seed inside her. It’s rape! It’s a violation! It’s wrong! I understand that the aliens are the last of their kind with no women of their own on this plant and that they need to reproduce, but I didn’t like how the author decided to play this out. Once Aria wakes from the cryogenic sleep, she learns what happened, and since the baby was lost she is forced to have sex with Breccan, the Commander. She has no choice in this. The sex is rape. No other way to look at it. Breccan doesn’t see this and neither do any of the other aliens. Non of the aliens even get that what they are doing to her and the other women; is wrong.

Breccan eventually tried to please his mate, Aria. Along with the rest of the alien guys, but it was just too little too late. Their was no revolution to these aliens that what they did and what they are doing is a violation.

Aria was simply annoying. She just gave in, didn’t fight or stand up for herself, and even thou the author tried to change this story up and make it a romance, it came off as Stockholm Syndrome.

The story itself had a lot of holes. Their was very little world building and I didn’t particularly like any of the characters.

The Forgotten Commander was not the book for me. I don’t know if I’ll read on or not.