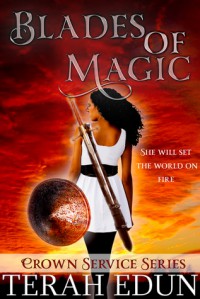 It is not a peaceful time in the Algardis Empire. War is raging between the mages and seventeen-year-old Sara Fairchild will be right in the middle of it.

She just doesn't know it yet.

Sara is the daughter of a disgraced imperial commander, executed for desertion. Sara is also the best duelist and hand-to-hand combatant in Sandrin. She lives quietly with her family’s shame but when challenged about her family’s honor, her opponent inevitably loses.

On the night she finds out her father’s true last actions, she takes the Mercenary Guilds’ vows to serve in the emperor’s army. Using her quick wits and fierce fighting skills, she earns a spot in the first division.

There she discovers secrets the mages on both sides would prefer stay hidden. Dark enemies hunt her and soon it's not just Sara questioning the motivation behind this war.

While fighting mages, blackmailing merchants and discovering new friends, Sara comes across something she’s never had before - passion. The question is - can she fight for her empress against a mage who might unwittingly claim her heart?

This is year one of the Initiate Wars. Sara is hoping it doesn't become the year she dies.

Blades of Magic is a young adult fantasy. I usually avoid young adult reads, but I picked this one up for free from Amazon and deiced to give it a go.

I was soon drawn into a world full of unexpected things, a variety of different magics, and a young character who has a backbone, a sense of honor, and strength. The writing was easy and fluid allowing me to get immersed in the story. The world is vast and we only get a taste. Their are hints of a complex political situation which created a civil war and more going on under the scene between different factions. It’s exciting, adventurous, and fast paced.

I try to avoid young adults aka teenagers; because their always seems to be a lot of drama with them. They come off selfish and immature. That was not the case here with Sara the daughter of a disgraced imperial commander. She is well developed, approachable, and likable. Her methods may not always be agreeable, but she was trained to think in a certain way. We see that the world is against her all because of what happened with her father and so she has learned to keep everyone except her mother at a distances, yet Ezekiel kinda sneaks under her defenses. I liked Ezekiel he balances Sara out. They make a nice team. It was nice to see Sara’s hard mask crack at times showing that she is a person after all and I admire her willpower.

I will say the book ends quickly and I wish their was more. The ending felt like ending in the middle of a story or chapter. That is my only issue with Blades of Magic. Other then that I throughly enjoyed the first installment in the Crown Service series and plan on continuing, just to find out what happens next.

Blades of Magic is a light, easy read with a young heroine who is tough and strong in a world that is almost entirely agains her.