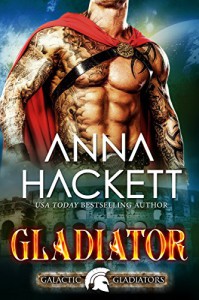 Fighting for love, honor, and freedom on the galaxy's lawless outer rim...

When Earth space marine Harper Adams finds herself abducted by alien slavers off a space station, her life turns into a battle for survival. Dumped into an arena on a desert planet on the outer rim, she finds herself face to face with a big, tattooed alien gladiator...the champion of the Kor Magna Arena.

A former prince abandoned to the arena as a teen, Raiden Tiago has long ago earned his freedom. Now he rules the arena, but he doesn't fight for the glory, but instead for his own dark purpose--revenge against the Thraxian aliens who destroyed his planet. Then his existence is rocked by one small, fierce female fighter from an unknown planet called Earth.

Harper is determined to find a way home, but when she spots her best friend in the arena--a slave of the evil Thraxian aliens--she'll do anything to save her friend...even join forces with the tough, alpha male who sets her body on fire. But as Harper and Raiden step foot onto the blood-soaked sands of the arena, Harper worries that Raiden has his own dangerous agenda...

Note to readers: This sci fi romance contains a lot of action (think wild gladiatorial fights and daring rescues), tough gladiators (the warriors of the House of Galen) and a steamy romance (between a fierce space marine and a gritty, alpha male gladiator). So if you like it fast, and gritty, and sexy, this is for you!

"Again, no fear in her. This woman had been kidnapped, torn from her planet, torn from her side of the galaxy, and tossed into terrible circumstances. Damned if it didn’t make Raiden respect her. - 29% Gladiator"

Gladiator is book one in the Galactic Gladiators series by Anna Hackett.

Hackett is an amazing science fiction romance author. I feel in love with this series and devoured it one book after another. Gladiator surprised and captivated me.

House of Galen is the home of the biggest and baddest gladiators.

Harper is kick-ass heroine. A force to be reckoned with. Her ship is attacked and she finds herself in-slaved to a cruel race and she is soon thrown into the gladiator arena where she rises to the top; gaining the attention of the reining champion of the House of Galen, Raiden.

Raiden is the reining champion of the arena. He’s alpha, demanding, and bad ass. I liked him and his alpha-ness. He soon finds himself captivated by this small human who can fight and survive in the arena and learns fast that he likes having her close in and off the arena field.

Their romance was a lot of fun. It worked. Both had to learn to give and take, to be partners together, and that they both needed something in life and that something was found in each other. I enjoyed the idea of a big tough gladiator being struck almost dumb by the much smaller women. It’s an appealing storyline.

Gladiator is a slow start, but once we get on the Gladiator plant things pick up and move fast. House of Galen isn’t what it seams and we learn that they are trying to help those that don’t belong in the arena. As things move along and start to ramp up in the story we get loads of action, fight scenes, and romance. The author takes her time introducing the characters, world, and what is to come. I loved meeting all the Gladiators of House of Galen and some of the other houses.

Gladiator is a fabulous start to the series. I was mesmerized and couldn’t stop reading.