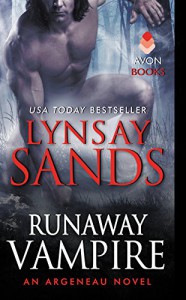 The latest entry in the sizzling paranormal vampire series featuring the Argeneau family - no one does wickedly funny and irresistibly steamy like Lynsay Sands!

Dante Notte has heard it said that love hurts. He just wasn't expecting it to run him over in an RV. Still, a punctured lung and broken ribs are nothing compared to the full-body shock he feels whenever he's near the vehicle's driver, Mary Winslow. He needs to keep her safe from their pursuers while he rescues his brother. Most challenging of all, he needs to claim this smart, stubborn woman as his life mate.

The naked, injured, insanely gorgeous younger man who clambered into her RV insists they belong together. If Mary wasn't feeling their incredible connection in every inch of her being, she wouldn't believe it. But now that the men who took Dante's twin are after her too, trusting her gut means risking her life for an immortal who's the very definition of a perfect stranger.

Runaway Vampire is a light and sweet read. Even though it’s number 23 it can be read as a stand-a-lone. But, I will say Dante Notte and his twin pop up in previous titles, so you might enjoy more if read in order.

Their isn’t anything new to the series. It’s pretty much the same, but with different characters or problems. I have to mention that I really enjoy Sands vampires. They are not your typical vampires and I like this aspect of the series.

The storyline is that Dante and his twin where sent to investigate vampire kidnappings and have gotten themselves kidnapped. Dante finds a way to get away, but now we are wondering who has kidnapped them and why? It was enjoyable the little RV drive to avoid being captured again and to protect Mary his life mate.

The romance is charming and sweet. Dante, I just adore him. He’s such a nice guy. Mary she was nice and I liked her level headedness. She had concerns being attracted to a man who looks in his mid 20’s early 30’s when she’s an old lady in her 60’s, but these two got along. I had fun with the shared dreams and once Mary was changed well the life sex – makes them pass out. I always had fun with that aspect.

I will say I did miss Aunt Marguerite. She has a gift for finding life mates and brings a little humor into the story, but here we don’t have her and well this couple “accidentally” runs into each other and nature takes it’s course.

I wasn’t overly impressed and it’s not my favorite, but I still enjoyed Runaway Vampire. I must admit that I prefer the older pervious titles, the ones at the beginning. They just had so much more life, humor, and quarry fun to them. Now it just feels a little stale even though we are getting a different plot with the kidnappings.