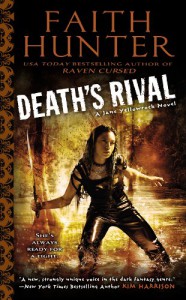 I was pulled in from the first to the last page. So much happens that you just can’t help, but get pulled in. The story is action-packed, full of suspense, secrets, and shocking moments. The story was set at a perfect pace and gives readers no excuse not to gobble this one up.

I enjoyed Jane. Loved Beast, Eli and the Kid. It was great to get some new characters. I hope Eli and the Kid become more then colleges, more then friends, maybe a family and that Jane can rely on them. She needs someone in her life. Someone to rely on. Rick is gone and that relationship is over and Molly isn’t her friend anymore, so Jane is alone and has no one to trust or be in her corner.

The author treats us to a more in-depth look into Jane’s personal history. Her memories of her past are frayed and it’s more difficult then she anticipated to pieces them together. As we all know by now Jane is a unique Skinwalker who houses Beast inside her, which only adds another element.

Beast, was her own character in this one. She’s smart, has a hidden depth to her, and we learn a few rare things about her. I loved learning more about Jane and Beast. It made both of them more real.

I do have issues with this series and they are:

- The love triangle. I still have issues with the men in Jane’s life and Jane thinking that every man she meets is sex on a stick. I’m so over this and wish she would be done and pick a man. Rick, also pops bak up near the end in Death’s Rival. He was a dick at the very end to Jane. OMG, I’m so over him and have been from book one.

- Then their was The Thing that happens in Death's Rival. I’m going to call it The Thing with Leo. This scene was so wrong on so many levels. Trust was lost all around. I hated what Leo did to Jane and to Bruiser. As for Bruiser I feel sorry for him. He couldn’t help his part in it. It was just wrong all around.

- And last I don’t get why Jane is still in New Orleans and working with Leo. Their has to be rogue vampires somewhere else for her to go after? She knows being around vampires will only bring trouble. Why does she stay?

Death’s Rival is a major turning point. At least for me. After five novels I finally see what everyone raves about. I had a blast reading, loved the non-stop action, and learning about Jane’s heritage. I couldn’t put this book down.