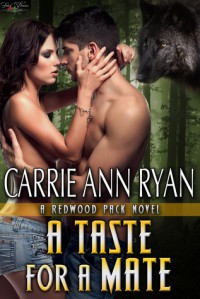 Jasper Jameson has spent his life caring for others, knowing that one day he might be blessed with his mate. He’s fought alongside his family and Pack for over a century but it isn’t until he meets a human who makes his wolf growl, that he knows that there’s something more than fate worth fighting for.

When Jasper walks into Willow Delton’s bakery she knows there’s something different about him. But every time he walks back out again, she doesn’t know what to think. When he finally finds the strength to ask her out, a new enemy in Jasper’s life has other plans.

A dangerous Pack is on the prowl and they’ve not only threatened the Redwood Pack but brought a demon into the fold as well. Forced into a new way of life, Jasper and Willow must fight not only for their lives but their weakening mating bond. Trust takes time but the two of them might not have as much as they need.

A Taste for a Mate is book one in the Redwood Pack series by Carrie Ann Ryan.

The prologue is very violent and shocking. The way the wolves change a human is brutal. I don’t know why the fates would give them a human mate, if this is what they have to go through, and their is no guarantee they will survive. And, last their is an overwhelming amount of violence against women in this book, which then provides the men with a lot of anguish. I didn’t care for all the violence.

As for the romance. It never felt like any type of romance. This might be classified as an insta-love storyline, but I never felt any type of insta anything. I couldn’t believe that Willow falls in love with Jasper after speaking to him once. It takes humans longer to come around. Also I felt that Willow gave in too easily to everything she was learning and seeing. She accepts it all with out any backward glance. I just couldn’t believe this.

I disliked Willows thought process. It was over the top and annoying. At one point she thinks Jasper doesn’t want her. She got this idea in her head and instead of talking or asking him how or what he feels she keeps thinking this. Then we have them sleeping together; before they even go on one date. At this point Willow still has this weird idea in her head that he doesn’t want her, but the author has them sleeping together. This doesn’t work for me.

Everything in A Taste for a Mate felt rushed. Things just come at you left and right and their is no time to process. I would have liked things to be drawn out and developed more.

Audio: A Taste for a Mate is narrated by Gregory Salinas. This is my first experience with him as a narrator. I unfortunately didn’t care for his narration. The female characters all sounded a little breathy and this wasn’t when they where in the mood, it was all the time. It was exasperating. As for the male voices; Salinas nailed them and I liked the voices for each male introduced.

A Taste for a Mate was not the book for me. If the blurb intrigues you, I urge you to give it a shot. Just because it did not work for me does not mean it won’t for you.