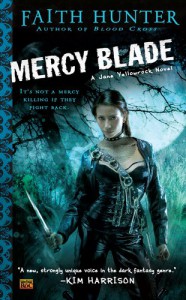 Things are heating up in the Big Easy. Weres have announced their existence to the world, and revived the bitter tensions that run between them and their old enemies: vampires.

As a trusted employee of Leo Pellissier, Blood Master of the City, Jane finds herself caught in the cross fire. When Jane is attacked by a pack of marauding werewolves, she is thankful for the help of a mysterious stranger named Girrard. He explains that he used to be Leo's 'Mercy Blade,' a sacred position charged with killing vampires who have gone insane.

What Jane doesn't know is why this powerful assassin left New Orleans--or, more troubling, why he's now returned. It's definitely not to make Jane's life easier...

We are treated to strong characters, mythology that is rich and world-building that is detailed. I’m enjoying the books, but something is still off. It might be the men in Jane’s life.

In Mercy Blade we are presented with a conspiracy, a murder, deceit, surprises, action, twists and turns, and a touch of romance all ending with either the (worst or best) cliff-hanger ever.

Jane is one tough women who gets the job done, but on the inside she’s like everyone else, looking for her place in the world and to be loved. We get to learning a little more about Jane and Beast. I like how the author has combined both characters together.

In Mercy Blade shifters come out into the world and Jane has to learn to navigate this new world. I enjoyed the addition of new supernaturals.

As for the love interest(s). I’ve never been sold on any of the men in Jane’s life. I’ve always felt she could do better. Neither George or Rick have sold me, but in Mercy Blade Jane is with Rick.

I’m not a fan of Rick. Sure he’s sexy and tough, but he also keeps secrets and he cheats on her. Cheating is a one-way ticket out the door. It’s one thing I don’t like to read about, can’t forgive, and really upsets me. I don’t care if it’s part of the job, it’s a no no for me.

Then we have George, aka Brusier, and the Master Vamps blood servant. He tempts Jane, but she knows that she will always come second in his life and not first. But she is also starting to see that she’s not first in Rick’s either.

The series has been fun, action-packed, and intense at times. I’m a fan of our heroine. She is a women after my own heart. (She loves tea ^_^) If you enjoy Urban Fantasy then give Jane Yellowrock a try. After that ending in Mercy Blade. I’m diving into the next book Raven Cursed.