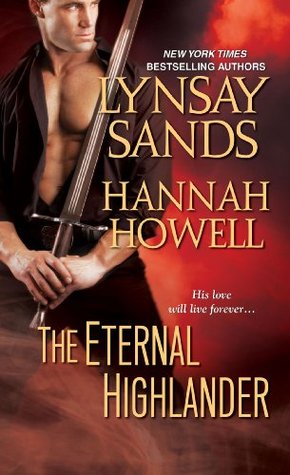 Reprinted Edition Writing together for the first time, New York Times bestselling authors Lynsay Sands and Hannah Howell present the darkly passionate story of two men sworn to conquer the hunger that pounds in their blood--and the women who may be their only salvation. . .

When Darkness Falls. . . Cathal MacNachton and Connall MacAdie are cousins bound by far more than blood ties and the rugged Highland landscape their clan calls home. The ancient curse of their ancestry has fated them to live by night with an unquenchable thirst that neither can tame. The only thing that can save their souls is marriage to Outsiders--mortals whose untainted blood will weaken the curse in their children and break the chains of fear that have made their clan a breed apart.

Bridget Callan and Eva Caxton are the women who will shape the clan's destiny. Marriage to these strange and mysterious men will rescue each of them from desperate circumstances--and draw them into a web of danger, desire, and intrigue. . . 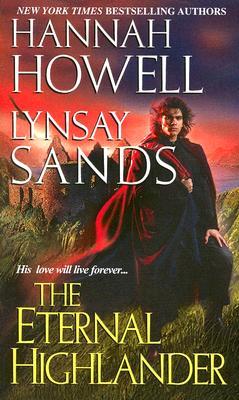 I don’t usually go for Historical Romances of any kind, but I like Lynsay Sands, so I had to try this novel out. I actually read this novel a couple of years ago and have been wanting to re-read the series. I enjoyed the writing and unique spine on the vampires for this series.

In The Eternal Highlander we get two stories in this novel. One deals with the MacNachton clan and the other the MacAdie clan. They are family, bounded far more then by blood ties.

Bridget is a young maiden who is on her first trip away from home. She is also a little more then human, but we don’t learn what until much later in the story. I sometimes feel women in the past have no spunk or wit, but Bridget is feisty, spunky, and witty which made her enjoyable to read.

Cathal MacNachton is lord of his clan. The MacNachton’s are a different kind of human, with superior strength, good night vision, live longer, but can’t go out in the sun and must drink blood. He is loyal to his clan, family, and sees a need to keep his people alive/well.

The MacNachton’s are not only being hunted by humans, but their are those in the clan who do not want to see the pureblood diluted with outsiders. Cathal and Bridget are a good couple. It was enjoyable to see the wowing. How Bridget tries to fight her feelings and how Cathal finally falls in love with his women. I like both Bridget and Cathal as characters and the unique spin on the humans/vampires/more. I also enjoyed that Bridget has an open heart and accepts all his brethren/clan even when several scorn and reject her. She thinks of their well being and how to bring light into their lives, when they must avoid the sun.

The Highland Bride by Lynsay Sands

The Highland Bride takes place about a year after Bridget and Cathal hook up and is about Connall MacAdie who is cousin to Cathal MacNachton.

Eve is a plain human who is witty, adorable ,and amusing plus a little clumsy. Which made her kind of funny to read about.

Connall is clan chief, stubborn, strong-willed, and a different kind of human.

This one was a little harder for me to read, because Eve and Connall don’t know each other before marriage. Then when Eve shows up at the MacAdie clan’s home, well her husband Connall does not spend much time with her, so how are they to get to know each other and grow to love?

It was an interesting arrangement and amusing to see how the relationship developed. Eve feels this need to find her place especially with her husband avoiding her and not knowing anyone. It was fascinating to watch Eve accept and figure out what her new clan are. She does not see them as soulless blood suckers, but the kind people they are. As for the danger the clan chief faces, well it is not just from the outside, but also inside as well. Which makes for an intriguing mystery adventure.

The Eternal Highlander gives us a unique spine on vampires, some mystery, adventure, and a sweet romance. I look forward to reading the next novel in this series.