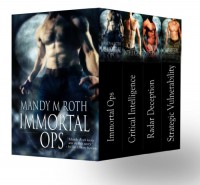 Captain Lukian Vlakhusha is having issues with his newest target, Peren Matthews. Something about her has left him staring at her picture and wondering what it would be like to touch her soft skin. When the time comes for the team to strike, Lukian senses danger and aborts the mission. He makes an attempt at meeting Peren and is set in his place by an independent young woman who knows what she is, and isn’t, looking for in a man.

Lukian is having trouble telling Peren that he’s what she fears most, a werewolf. Can they make the passion that burns between them last, or will Lukian’s condition be too much for Peren?

Critical Intelligence
When loyalties are questioned and bonds forged, the I-Ops find themselves fighting a war to guard not only their secrets but their lives as well.

Missy Carter leads a rather boring, overworked life as a system analyst for the State Department or rather, that’s what she lets everyone believe. No, in reality her life is anything but boring. As an agent with the Paranormal Security and Intelligence, she’s seen and done it all. Intelligence is her specialty, assassination is her hobby. The only problem is that the things she spies on don’t die easily. In fact, some of them were dead to begin with. She’s learned to handle anything life can throw at her. That is until the biggest paramilitary pain her ass shows up again. Lucky for him, he’s sexy.

Roi Majors, second in command of the I-Ops, is having a hard time believing that Intel can only get half the information needed to bring down an underground ring of vampires with big spending backers who are hell bent on creating a race of supernaturals with multiple strands of DNA in them. As the team searches for answers, Roi searches for sexual release. When he finds himself paired with the one woman in the world who seems immune to his self-proclaimed charms, he can’t wait to see her to safety and then bid her good riddance. He never counted on falling in love with her. And he sure in the hell never counted on her claiming to be an agent with a branch of the government no human should know about.

Radar Deception
Dr. Thaddeus Green survived a werepanther attack long ago, leaving him immortal and a member of the I-Ops team. He’s dedicated his life to genetics and to serving his country. After his mutated DNA led to the death of his loved ones, he vowed to never let anyone close to his heart again. Try as he might, Green is unable to stop the mystical pull to the tall, leggy blonde with a sharp tongue and an even worse bite. Thinking Melanie is suffering from mating withdraw, Green is prepared to do what he must to assure her survival, even if it means claiming her for himself, regardless of his need to protect his heart. Little does Green know that fate has been preparing him for Melanie Daly all his unnaturally long life.

When ghosts from the past resurface, in ways he never dreamt possible, the normally mild-mannered scientist finds himself drawing on his inner beast and rage to assure his mate and their future are protected.

Held prisoner in remote testing facility in the middle of the Brazilian rainforest, subjected to torture and abuse, Wilson Rousseau has long since given up hope of being rescued. Days blend together until he can’t help but long for death. Saved from his isolated hell by a female’s distress call, he feels an instant connection to her.

Kimberly thought she was taking a trip to South America to study indigenous plant life. She had no idea she was playing into the hands of a mad man whose goal is to create a genetically altered army of super soldiers. When she finds herself locked in a cell with Wilson, a man who would give his life to save hers, there is an instant attraction. But the dark secrets surrounding their imprisonment may change their lives forever. Can they find a way to beat the odds and be together or will the mad man win?

Immortal Ops Box Set
This is a great box set especially if you can get it at the discount price. The stories are quick easy and fun to read. We get hot alpha military shifter men and the women who complement them total kick ass. The first book in the series was hard for me to get through (most 1st books are) but each book after has been enjoyable and entertaining.
MY REVIEW ON EACH BOOK 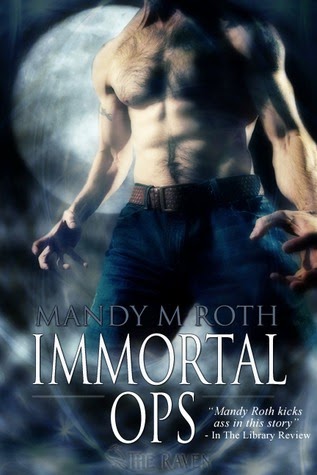 Immortal Ops is an ok start to a interesting paranormal romance sereis. Mandy Roth created a world of natural born, lab created and genetically modified/bitten shifters. They are a special ops team that have dedicated their life to protecting the sup races.

It was an interesting start to the series and I liked, I didn’t like it, It was ok! It’s a short, fast novella with lots of action. The hero/heroine fall for each other fast. By the end I felt like something was missing from the story. I can’t pinpoint what I felt was missing. Just felt like something was. As for the sex scenes they border on erotic. The Ops team are a very sexual race and when they claim their mate its raw and carnal. I did like the mix of paranormal beings. We are given werewolves, vampires, fae and so much more. Many of the people in the story are a mixture of supernatural creatures.

Immortal Ops is an ok start to this series It’s a quick short read. It’s a nice military supernatural story to pass sometime and I look forward to getting to know the other members of the I-Ops team. 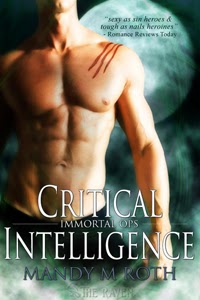 Critical Intelligence is book two in Immortal Ops series by Mandy M. Roth. Wow this was an improvement from book one. The plot thickens, lots more action and we learn more about the I-Ops Team. The story is a short story, but it is not rushed and more character development made for a much more appealing read! It also helped that we get characters that have already known each other in book one giving them a chance to develop more of a romantic relationship.
Both Roi and his gal Missy did not disappoint. They worked great as a couple. Both are full of attitude, sass and both are alphas, which made for an fascinating read. The endless bantering kept me entertained. We get a fair amount of sexual tension built up in the previous novella that when they hit it off its HOT and the romance did not feel too rushed.
I enjoyed Critical Intelligence! The snarky witty comments, hot sex and action kept me engaged and I look forward to seeing more of the other I-Ops team members.
4 STARS – Radar Deception 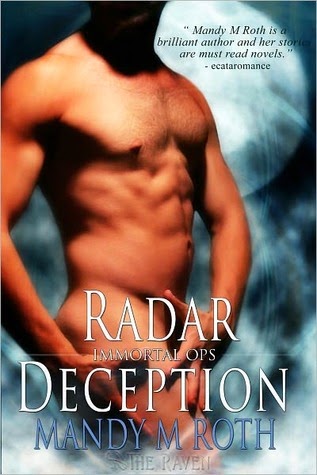 Radar Deception is a quick, fun, military, supernatural, sexy read. I am enjoy this quick easy read series. We get interesting supernaturals and hot sexy romance.
Melanie Daly is an interesting character from the begging. We meet her in book one Immortal Ops. In this installment she gives her family, friends, I-Ops team as well as us a wake-up call about her. Some interesting bombshells happen that reveal more about this women. She is perfect for Green. Tailor made! I enjoyed seeing the relationship grow and for both of them to find love.
Dr. Thaddeus Green is part of the I-Ops team. He has a past that troubles him and makes it hard for him to open up and love a women. I enjoyed learning about his past and seeing him move on in life. Melanie is perfect for him. Both complemented each other well. The love relationship was not the insta-love we got in book one. It develops over the series and to see them finally come together was nice.
I am enjoy the quick easy read. It is a nice destruction from the heaver books. I look forward to the books in this series and seeing what happens to the rest of the un-mated I-Ops Team members.
4 Stars – Strategic Vulnerability 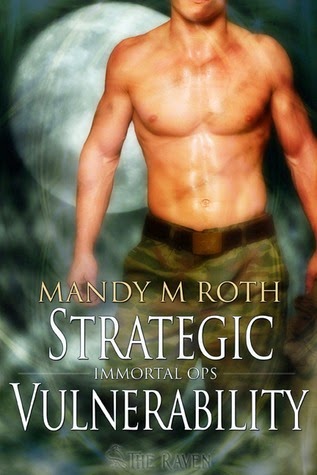 Wilson and Kimberly are put together as part of Dr. Krauss, our evil mad scientist, for the purpose of creating the next super soldier. This is book four in the Immortal Ops series by Mandy M. Roth and it is fast paced, non-stop action. I really enjoyed how the book progressed, the action and the relationship building between our H/H’s.

Wilson was captured, tortured and abused for almost two months by the elusive Dr. Krauss. It is nice to finally meet the mad scientist who wants to be a God. When Wilson and Kimberly finally make their escape I had hoped that our mad scientist got killed, but then the series would be over and what evil would plague our I-Ops team.

I like Kimberly. She is emotionally stable considering the horrors thrown at her. She took it all in stride and did not freak out like most women would do, but kept her head about her and played our Dr. Krauss.

Wilson I stated falling for him in Raider Deception. In the previous books he comes off as an ass, but in Raider Deception we learn that he is a caring, sweet man who would do anything to protect his friends and their mates. Who would have ever thought a were-rat could be sexy? He pulled of sexy even with the filth covering him after two months of torture and abuse.

I liked how the author built the relationship, how it developed, between Wilson and Kimberly. They where put together in a difficult situation, but they came out fighting and caring for each other. I have to say the date Wilson put together for Kimberly was so sweet and romantic. The sex was hot!

The previous heroines played a role in this book as well and it was nice to see them again. I liked that they stood up for something on their own. It shows that this series is full of strong females.
The Immortal Ops series has surprised me. I really did not think I would enjoy this series as much as I have. Each book in the series is a short quick read, but boy do we get fun adventures, hot sexy alpha’s and strong females. I recommend checking out this series especially if you are looking for something quick with a military supernatural theme.